Happy winter! In the past couple weeks winter has definitely arrived in Minnesota. I glanced down at my temperature screen in our car one morning as I drove into Stillwater and it was -11 degree fahrenheit. We have arrived! It wasn’t until yesterday though that I realized how ‘normal’ this has gotten when I turned to Timothy and said it was finally 33 degrees, so it was WARM enough to take a walk around Lake Como. I made him swear he wouldn’t put on a facebook status “Allison’s a Minnesotan haaaaa” but I guess that’s a moot point now since I’ve recollected that strange moment here. But when you live in the below-zero temperatures for a few days, your mind gets frozen, along with your patio door hinges and single-pane window edges (yes, inside the apartment).

But before I say anything further, I want to lift up a prayer quickly for our neighbors who got their cars broken into this morning. We don’t know who did it, and it looked like the car owners just found all this out. A truck by the garage door and the red compact next to our car got their windows bashed in. I sheepishly gave them my business card and number, offering them to call if they needed help, a ride, witness statement, as I rushed off to my coffee shop to get some work hours in this morning. Our car is fine. The red car belonged to a sweet Asian couple, and they especially looked a little jarred, and they looked about Timothy’s and my age. So if you could pray for them and the guy with the truck too, I think that would be awesome.

So that’s one way to meet your neighbors! I like knowing my neighbors, and looking out for them, as I hope they look out for Timothy and me. Anyway, so that was my weird morning.

Since you all were so intent on seeing pictures of our cat, Buddy, and my head-shots and all, I thought you might enjoy seeing pictures of “winter” in Minnesota. It’s not super exciting, but as I chronicle from our fresh, “new” perspective (well, 3 years into it), I figured loved ones back home in Washington might like to see what our life out here looks like.

Lake Como is a 20 minute walk from our apartment and 1.6 miles all the way around. Yes, I usually drive to it, but that’s not the point. The point is, I might be lazy, but I sure darn love me some walking around a pretty lake with trees, adorable houses, happy dogs, and a weird pavilion area that looks like a detached wing of the White House. To Minnesotans, Lake Como is probably associated with crying babies, annoying children; but I don’t care. I love it. A little snapshot of nature in the middle of a beautiful mini-city. 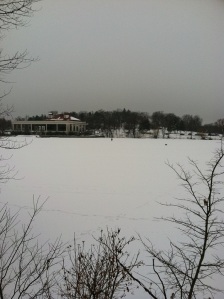 That’s the detached wing of the White House I was talking about. There is an outdoor pavilion that faces the lake, some paddles boats for the summer, and a little cafe inside. Yes, that is a person and her dog on the lake. I think the lake is iced up now about a foot thick. Last week on the news a family drowned in their SUV as they drove it on the lake under a bridge (where ice is thinnest). The news people suggested to drive with your windows open. Because you know, suggesting to the public to avoid driving on a frozen lake ALL TOGETHER is a crazy idea. I’m sorry, but that’s one of the Minnesota winter things I’m just not jiving with. But to play catch with your dog, on a SUPER frozen lake like this one, that could be fun. 🙂 It was a big gold retriever, oh such a happy dog.

From the south-end of the lake, halfway around. See the sticks pointing up in the middle of the lake? That’s for ice fishing and directing people traffic if they put up little shacks to ice fish. Last week there were lots of little boxes, and maybe they went away because it got to above freezing this week. Who knows, but it’s definitely weird to see little mini “stop” and traffic markers for snow mobiles and such, not on the road.

These bears are so cute with the fresh snow the day before. Another thing about snow – there’s pretty show and ugly snow. Ugly snow shows up when dirt and grime get piled up on to of the snow because it hasn’t snowed in a week or a month, but it’s been cold enough that the snow hasn’t melted yet. Pretty snow is the fresh recently-fallen snow that covers up the ugly iced-over I’m-not-melting-till-April snow. 🙂

It works out though. Being a kid in the PNW, you saw snow, if you were lucky, once a year. So I think the last few winters in MN have made up for that lack of snow! We have a new appreciation for full tanks of gas (if you leave your tank less than half full out in below freezing temperatures, the gas can freeze, thus your car might not start), handmade hats (Thanks, Amanda!), warm snuggles, and double pane windows (I figured out why we don’t have to pay for heat, its because our apartment people were lazy and only installed single pane windows).

So, season’s greetings from the arctic tundra. 🙂 We’ve got a long way to go before April 23rd, as it seems that winter here likes to creep up until hours before my birthday. So there you have it. Anyone else experiencing Minnesota in the winter from a different part of the country? What have you learned, for better or for worse? Hope you all have a happy Wednesday!

One thought on “Winter #3 in the Arctic Tundra”

Evidence of the Journey
Kiss My Tulle
Jason Micheli

thoughts on life and faith, over a pint

Musings of an ELCA missionary in Cameroon - by Elisabeth Johnson